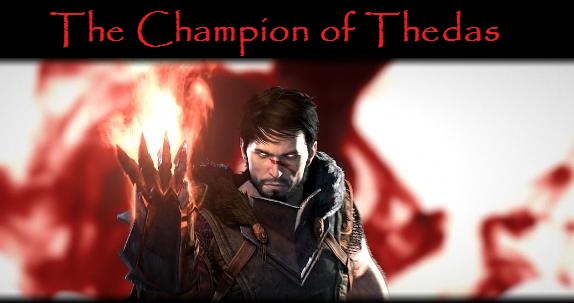 My name is Garret. Garret Hawke. I am from Ferelden, made into a refugee by the Darkspawn, forced to this wicked, cruel city. Where I've come from matters little, wether it is about my dead brother. It matters little. Where I am from is nothing to me, as this city is my home now. For me to know. This city...

A city of Templars, my mother often reminds me, as our companion, Aveline, sits in the dark, staring at me. Knowing of what I am, seeing that I am a mage...Just like Bethany...or Father. How she and her husband, Ser Wesley, knew of my powers, I do not know. I carried a sword the size of a claymore, and do not remember casting a spell.

Maybe it's a lyrium secret known only to Templars, and of those they love. Maybe it was a hunch, as Aveline and Wesley seemed to be strong in mind and strength.

I felt for her, I really did. Wesley had been taken by the taint, and so I ended it for him. I do not know if I did it in favor for Aveline, out of mercy...or simple bloodlust.

The thing that often creeps up on me...The lust of power...Not magic, simpley the ability to kill. To put a blade through someone's chest, an axe head atop a skull. Or my hands. The funnest way to kill is with my hands. Boosting my power with magic, so I can kill a Hurlock in one punch, tear out an Ogre's heart...

Or the time I found that nest. No High Dragon, thankfully...no dragon to be honest. Just a Drake, and four babies. I accidentally ran into him, an embarrassment really - not to have seen or heard him before I shoved my dagger through his pretty, scaled neck.

When his blood spilled, I relished in it's appearance, frenzying. Killing each dragonling painfully and expertly.

But, the past matters not, I keep telling myself this. We near the Gallows, an old prison as far as I knew or cared. Likely just a way to make sure no mages entered the city, or check up on other duties like I did in Ostagar.

Retrieved from "https://dragonagefanon.fandom.com/wiki/The_Champion_of_Thedas?oldid=4753"
Community content is available under CC-BY-SA unless otherwise noted.