A green laurel on a blue field

House Cousland of Highever is a noble family from Ferelden, one of its wealthiest and second most powerful families.

The Couslands rule over the northern coastlands from their ancient seat of Castle Cousland, a massive fortress overlooking the Waking Sea. They have reigned as the Teyrns of Highever since the lycanthropy plagues during the Black Age. As a teyrnir, they are notably one of the oldest lines of Fereldan nobility—claiming a line of descent stretching back over 600 years as Alamarri tribesmen before the kingdom was founded in the mid-Exalted Age—and the only two remaining teyrnirs. They have long since enjoyed considerable respect in Ferelden, especially after the rebellion against Orlais, as Teyrn William Cousland and his son Bryce Cousland supported King Maric Theirin’s forces early during the uprising.

Their dominion was seemingly brought to an end after the fall of Castle Cousland when one of their vassals, House Howe of Amaranthine led by Arl Rendon Howe, betrayed them after having harbored deepening jealousy of Teyrn Bryce Cousland's influence and power. Rendon resented that his House—whom he deemed "more nobler"—was of lower social and political statue than the Couslands and launched an unexpected attack that nearly wiped out the entire Cousland bloodline. He conquered Highever within hours, claiming its lands and titles for himself. However, Rendon's hold was jeopardized when Warden-Commander Duncan helped Bryce's youngest son Aedan Cousland escape in exchange for joining the Grey Wardens. House Cousland was restored to their former stature by Ferelden's royal family after the Fifth Blight ended. Bryce's eldest son, Fergus Cousland, inherited his father's lands and was elevated to Teyrn of Highever.

House Cousland's heraldry is a green laurel wreath resembling two white wings on a blue field, a symbol of the choice Teyrna Elethea Cousland made: when defeated by Calenhad the Great during the Unification of the Alamarri tribes, she swore fealty to Ferelden's first King, thus ending the war in the northern coastlands and joining the newly founded kingdom. The blue, the dominant Cousland color, is a reminder of the ocean, and of the port of Highever, opening the way to the Waking Sea.

Their official motto is "With justice and temperance", which is rarely mentioned. Their unofficial motto, which is as well known as the official one, is "A Cousland always does their duty"—which is used much more often and signifies their stance as ardent royalists. Their words are a reminder of their greatness, as they like to remember people if they are second, it is only to a King.

The outpost of Highever was originally held by House Elstan, who were a secondary branch of the then-freeholder family of House Howe. During the Towers Age, Bann Conobar Elstan was murdered by his wife, Flemeth, thus ending the bloodline. Sarim Cousland, captain of Conobar's guard, took the lands and title.

The Couslands then declared their independence from Amaranthine, starting a war that lasted 30 years. When the war ended, Highever won its independence and possession of half the land that had once been southwestern Amaranthine.

Highever became a teyrnirs during the Black Age. Previously, the Couslands held only the minor title of Bann. During the lycanthrope plague, Bann Haelia Cousland or Mather Cousland according to other sources, gathered the lords together under the Cousland banner to drive the werewolves out of their lands, thus earning the title of Teyrn.

In the beginning of the Storm Age, the Couslands conspired with Warden-Commander Sophia Dryden in the Grey Wardens' attempted rebellion. The rebellion was betrayed to King Arland by politicians before it began, and the king's guard ambushed their meeting place, with the rebels barely managing to escape. The Couslands were not so lucky however. King Arland executed the Cousland Teyrn and a number of others, and then sent soldiers to Soldier's Peak to stamp out the remainder of the rebellion.

Unlike his father, Rendon Howe was part of the rebellion like his uncle Arl Byron Howe. Rendon and Lord Bryce Cousland fought beside each other at the battle of White River, becoming two of the 50 rebels who survived the defeat. Thereafter, Arl Rendon Howe was a great friend of the Couslands.

After the death of his father William, Bryce assumed his seat four months after Ferelden won its independence from Orlais. He later married Lady Eleanor of House Mac Eanraig and had two children: Fergus and Aedan. According to Dairren, Bryce's youngest son was more popular and talented than Fergus and was more likely to be chosen to take over as Teyrn of Highever instead of his brother.

Arl Howe later betrayed the Couslands, using the chaos of the Fifth Blight as his route to power. Teyrn Bryce Cousland had called together the forces of Highever and Amaranthine, intending to ride with Howe to support King Cailan against the darkspawn. However, upon arriving at Highever, Arl Howe told Teyrn Cousland that the Amaranthine forces would be delayed for a few days. Not one to keep the king waiting, Teyrn Cousland sent the bulk of Highever's forces ahead to Ostagar under the command of his eldest son and heir Fergus Cousland, intending to leave with Howe's Amaranthine men once they arrived.

After Fergus left the castle, Howe's forces took advantage of the Couslands' weakened defense and made a surprise attack during the night, killing the teyrn, his wife Teyrna Eleanor Cousland, and Fergus' wife Oriana and son Oren, as well as most of the other inhabitants of the castle. Though Fergus was left as the rightful heir to the Teyrnir of Highever, Howe then declared himself the new teyrn. Unbeknownst to Howe, Aedan was rescued by Warden-Commander Duncan and managed to escape in exchange for joining the Grey Wardens.

Following the end of the Fifth Blight, Fergus Cousland inherited Highever and became the next Teyrn. His brother, Aedan, succeeded Duncan as Ferelden's new Warden-Commander and was given control of Amaranthine. 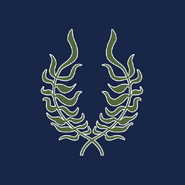 The sigil of House Cousland. 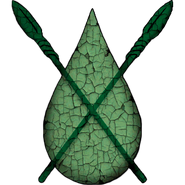 The sigil of Aedan's "House Cousland of Amaranthine" following his ascension as Warden-Commander of Ferelden.

Retrieved from "https://dragonagefanon.fandom.com/wiki/House_Cousland?oldid=7534"
Community content is available under CC-BY-SA unless otherwise noted.