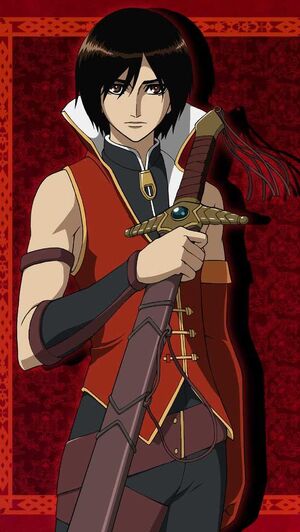 "He recognises neither Danger nor fatigue. Those that do no fall by his sword clamour to join his ranks. Already the powerful Vael and Aeducan families have been brought down to kneel at his feet, and the Triumvirate of the Qunari stand at his side." ―The Current Orlesian Empress, Celene I expressing in words her grudging respect for Adrian, commenting how even Sebastian's older brother aligns with him.

Adrian Pentaghast (Cousland) is the Nevarran Crown Prince, next head of the Nevarran Pentaghast Clan and a cousin of the the current head of the Ferelden Cousland Clan in the Dark Rising Series, as Dumat's Perfect Vessel he is the Supreme Leader of the Dark Gods and therefore both the Darksiders as well as the Post-Blight Darkspawn.

"Beware of Adrian. He knows well how to exercise his Will, a rare virtue in the world today, and he is the kind of man who could make the world bend to that Will." ―King Alistair Theirin warning Hawke about how dangerous Adrian truly is.

Adrian is an individual with a very complicated personality based on the act of Pride, even claiming that Dumat's actions were the cause that his best friend Hybris became the first Pride Demon, an extract of Dumat's own Pride. Adrian is understanding though revolutionary, going by the "ends justify the means", he would go to any extent to effect change similar to how Dumat did Thousands of years ago when he rebelled against the Maker.

Adrian is surprisingly calm and controlled despite his self confidence and his god complex described as "the size of Tevinter", unlike the other Dark Gods he is also cunning and cruel - going as far as to discreetly torment those that rise against him in-order to stop opposition. Adrian is incredibly sensitive to the harm against those he cares about, he would go to war (after failing at more discreet methods) to claim or protect what is his (or what he sees as his), Adrian is also very sympathetic.

Spirits also respect Adrian (Demons more so), Adrian's aura even prior to his fusion with Dumat's Soul was dazzling to the Spirits but after combining with Dumat, they believed that Dumat had been "reborn" to lead the Demonic Revolt against the Maker anew. Adrian's aura soon became like Dumat's - very beautiful and well respected by those of the Fade and Animals with High senses, Adrian's senses also increased and two major aspects of his personality were enhanced - his prideful but sympathetic nature towards others, it is later revealed that Adrian's soul has not only been reincarnated but started as a shard of Dumat's soul.

Adrian's appearance has changed over time, however he is most common in the way he looks by Magic's Blade, wearing red and black leather that held tight to his frame with his upper body being sleeveless. Adrian would wear skin-glove like material over much of his left arm and his lower right arm, despite carrying around only a extremely powerful Magic sword, he is anything but defenceless.

Adrian is described with dark curtain-like hair and red/brown eyes, he is pale and thin but not without some level of muscle on his body, though not as quick as Zodiark nor as physically defined as Carver Hawk, Adrian is strong enough to keep his own and quite evasive and elegant in his own particular way - avoiding the strikes of an enemy until they tire and then utterly overwhelming them.

Adrian was born Twenty Years before Dragon Age: Origins and spent Nineteen of those Years as a Human, brought up by one of the first Dark Gods: Teroare, his Grandfather. Trained from Youth as a Political and Physical weapon, capable of fucking with the minds of competition and killing enemies with discreet pragmatist(1) attacks, Adrian in his youth Mastered some level of Sword and Shield combat as well as Duel Wielding but despite that he prefers only wielding a Longsword. Adrian also took interest in Duelling and some level of Magical Manipulation, Adrian soon learned his way into Politics and gained a lot of attention in the Fanatic Side of the Ferelden Landsmeet especially in the eyes of its Leader: Teyrn Loghain Mac Tir, Adrian proved his position of having both Angry Ferelden and Rebellious Nevarran Blood by siding against the pro-Orlesian Empire policies in the Government.

The Darksiders and the 5th Bight

By his Nineteenth Birthday, Adrian became involved in the actions of the Dark Chantry: a group of people who believed in the return of the Old Gods (through the Dark Prophecy), were wronged (both brutally and not) by the Chantry/The Maker or were Apostates/Blood Mages or even Individuals that went against the mistreatment of the Mages. After the fall of the Cousland Family (which Adrian and Teroare supported through the Dark Chantry) to Arl Howe, Adrian became a Darksider and also his position within Loghain's camp of Allies was risen to the highest position - standing in the shadows advising Loghain as his "rear man" (with Arl Howe became his "right hand man" and Ser Cauthrien as his "left hand woman"), Adrian would continue to play this position of power for the remainder of Loghain's time in power and would use it to further the goals of The Darksiders.

Eventually the leader of the Darksiders would seek to absorb Adrian and become the Perfect Host for Dumat's Soul at the Anvil of the Void, however Adrian turned on him at the last moment and absorbed the Leader's Power (as well as life and knowledge) before then accepting Dumat's soul into his body shortly before his time ran out, in one move Adrian had taken control of the The Darksiders and become the leading figure of the Dark Prophecy. Adrian accelerated the Blight to attack Denerim in hopes that it would put the Archdemon in range of being defeated, Adrian and The Darksiders would go on to lead a Darkspawn naval Force (dubbed the "Wroth") into Denerim's Docks which would be used to destroy the entire of Denerim's defenders in a short amount of time, despite these effort however The Darksiders didn't raise a finger to stop the Archdemon's defeat.

"He is ambitious, ruthless and cruel beyond - thank the Maker! - your Imagination. The laws of Men mean nothing to him. As rumours would have it, he shipped his own cousin off to the Chantry and turned her older brother into his personal General on his path for ultimate power. He will stop at nothing!" ―A Fanatically Loyal Orlesian Chantry Seeker of Truth, whom was working with Orlesian Mercenary raiding Nevarra, about Adrian.

While leaving politics in Ferelden to his Landsmeet Allies, Adrian went to Nevarra where he intended to make his claim for the Throne, to do this he worked his way into his Uncle favour: his Uncle being King at the time. Adrian quickly became a High ranking member of the Nevarran Military and wormed his way into Politics, he was such a successful/charismatic leader that his Uncle praised him countless times. He also used his contacts to enhanced the number of unfortunate disgraces (while destroying the evidence of manipulation afterwards) exhibited by Cassandra Pentaghast to get her banished off to the Chantry which lost her entitlement to the Throne of Nevarra, Cassandra's older brother had little interest in ruling but instead wanted Nevarra to rule the world and so he gave up his right to the throne to instead be a General while believing that Adrian would bring about his wishes, with advice from his father the King agreed to announce Adrian as Crown Prince and therefore his successor.

Retrieved from "https://dragonagefanon.fandom.com/wiki/Adrian_Pentaghast_Cousland_(Dark_Rising)?oldid=4095"
Community content is available under CC-BY-SA unless otherwise noted.